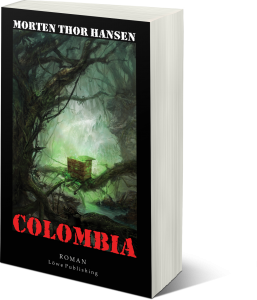 In 2008, life is good for archaeologist John William Archer. He has a respected position at George Washington University in Washington, D.C., is acclaimed for his publications on ancient writing systems, and has a promised seat in the government when his friend Phil Boomer wins the presidential election – and, of course, the icing on the cake: his beautiful wife and their nine-year-old son. However, one fateful night in October, he crashes their car into a tree, with a fatal outcome for his family.

Devastated by the loss and abandoned by himself, the academic world and society, he sits eight years later in the university’s basement office, when Secret Service agents sent by President Boomer offer him an opportunity to return to life.

An intercepted message about a mysterious find in a Colombian coffee plantation has activated an old protocol within the NSA. The protocol takes them back to an episode involving American scientists on expedition in Colombia in 1974. If there is a grain of truth in the old information, they could end up with groundbreaking technologies that would be worth billions of dollars.

Archer and a small team travel inconspicuously to Colombia to discover if there is any truth to the myth. Nonetheless, by accepting the task, the team has placed itself in the middle of a deadly race. The expedition is whirled into a spiral of lies and deception, and something suggests that the origin of the most deadly opponents lies light years away from Colombia’s damp rainforest.

This sci-fi thriller novel was published in Denmark in 2017. It takes place in Washington, D.C., San Francisco and Colombia.
If you think it would be cool to get it translated into English, let me know. If there is enough interest, I would love to make it available for the English-reading audience.